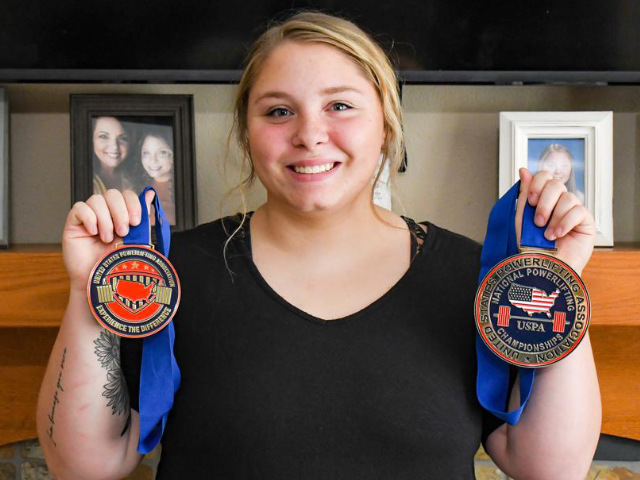 “And one day she discovered that she was fierce, and strong, and full of fire, and that not even she could hold herself back because her passion burned brighter than her fears.”

We all have choices how we approach tough stuff. For McKenzie Haven, it was an illness that brought about high stress and anxiety which caused her to lose control of her leg muscles and cause non-epileptic seizures. This was a lot to figure out as a sophomore in high school. What did McKenzie do to attempt to get back on track? Weightlifting! Recalling how she enjoyed lifting weights at school prompted her to check out a local gym where she found an interest and relief from training as a powerlifter. McKenzie found not only relief from her anxiety and episodes but unexpected success as a powerlifter. She competed at the USPA drug tested National competition in Palm Springs where she set three North Dakota state records in her age group. In squat she lifted 297.5 pounds, on bench 154.3 pounds and deadlift 330.7 pounds.  These totals combined for a national record for total weight of 782.7 pounds and McKenzie brought home Gold from the competition. Oh, and an invitation to the World Championships this November in Costa Mesa, California.

If you know McKenzie you know that she is a quiet and shy young woman. One who seeks no attention and prefers to be unnoticed. I have known McKenzie since she came roaring into the world at 24 weeks and a whopping 1 pound 9 ounces. She amazes me as she just continues to rise up and find her strength to survive adversity. First, as a tiny infant and more recently as a young adult as she worked through a potentially life altering medical experience.  McKenzie reminds us that we all have choices how we respond to life’s curveballs. She inspires me to try harder when my path seems rough.

Kudos is a program Women Empowering Women has created to recognize the good works women do. Women we know who’ve lived quietly, joyfully or creatively influenced our lives. Women who are an inspiration and deserve to be noticed for their efforts and impact. Women Empowering Women is a nonprofit organization dedicated to meeting women at their needs and helping them become the best versions of themselves.